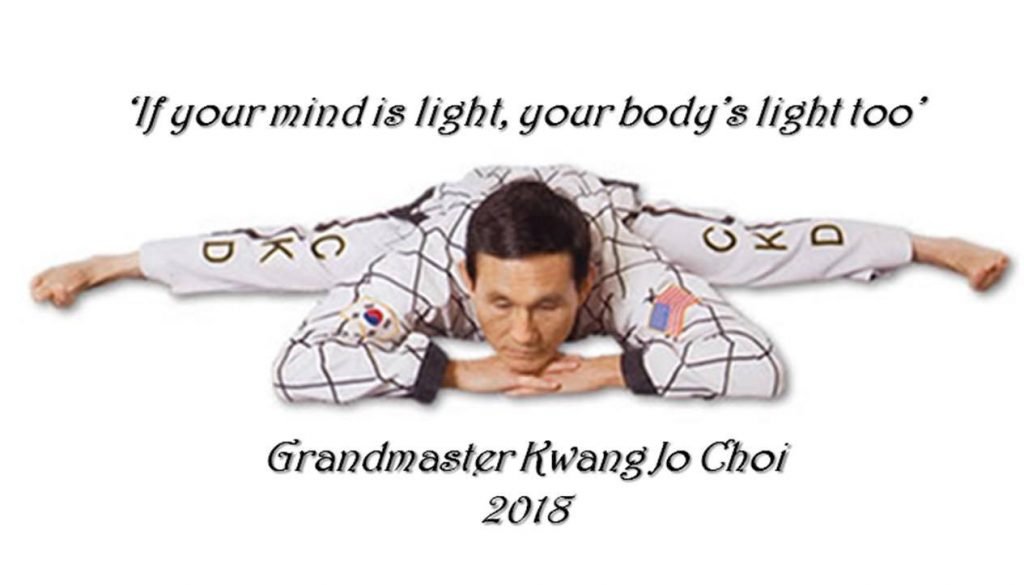 Grand Master Choi, Founder of Choi Kwang do, the Modern Martial Art. Kwang Jo Choi was born on March 2, 1942, in Daegu City, Korea, which was under Japanese control at the time. He started training in martial arts at the age of 12 because his father was concerned that Kwang Jo was small and physically weak, and he wanted his son to be able to protect himself in the war-torn streets. Kwang Jo’s first official martial arts’ instructors were Grandmaster Dong Ju Lee and Grandmaster Jung D Cho. They trained him in Kwon Bup, a form of Korean karate.

During his national military service, Kwang Jo became a chief instructor in the 20th infantry division and came into contact with General Choi (the founder of Taekwon-Do) when the military began to use that sys­tem for unarmed combat. After complet­ing his military service, Kwang Jo traveled to Seoul to see General Choi, who taught him the art. Shortly thereafter, Kwang Jo was named a chief instructor for the In­ternational Taekwon-Do Federation (ITF) and taught martial arts instructors from all over Korea and overseas. At the same time, Kwang Jo served as an instructor for the national police department, and taught many military instructors and members of the armed forces. In 1967, the ITF sanc­tioned him as one of six instructors to demonstrate and promote Taekwon-Do throughout Southeast Asia.

Due to the lockout movements of his traditional martial arts training, however, Kwang Jo injured his body, which forced him to move to North America for medical treatment in 1970.  Traditional Arts such as Taekwon-Do and Karate all involve taking joints to full extension and this, over time, is proven to be extremely damaging.  After visits with many doctors, Kwang Jo decided to try rehabilitating his own body without surgery. He also studied physical therapy techniques and slowly began to recouperate and heal his condition. It was during this process that Kwang Jo started realizing that the harsher, lockout movements used in conventional martial arts, such ast Taekwon-Do and Karate, had caused his injuries. As a result, he began to study anatomy, physiology and human-movement sciences.

From 1978 to 1987, as Kwang Jo completely restored his body, he incorporated everything he had learned into a new Martial Art System called Choi Kwang Do, which translates as “the art (or method) of Kwang Choi.” It is now one of the fastest growing martial arts/health and fitness programs in the world, with schools located in the United Kingdom (Scotland, Wales, England, Ireland), Canada, Greece, Russia, Argentina, India, Jamaica, New Zealand, Barbados, Nepal, Russia, Spain, France, Germany, Sweden, Peru, Chile, Moldova, Hong Kong, Australia, Netherlands, Algeria and South Korea.

Grandmaster Choi has also taught Choi Kwang Do to the American military at Fort Benning, Georgia, the largest infantry training center in the U.S.; to the U.S. Rangers; to Georgia law enforcement officers; to narcotic agents; and to tens of thousands of dedicated Choi Kwang Do students around the world.

The most incredible thing about the Founder of our Art is his openness to learning and developing.  ‘Resilience’ and ‘Growth Mindset’ are some things that modern understanding encourages us to foster in children and adults alike in terms of the opportunities this may present and the benefits to mental health and wellbeing.  These are qualities which Sahjonim has always naturally embraced.  He continues to train and, as we discover more about the human body and the ways in which we can combat degenerative illness and attain optimum health, he incorporates new findings into the way in which he encourages his students to train.  Most recently, Sahjonim has upgraded the curriculum in order to provide a more comprehensive and rounded journey and progression enabling students to develop phyiscally and mentally through an integrated, holistic system.

At 79 years of age, Grandmaster Choi is a living testimony to his art. He punches and kicks with incredible agility, speed and power; he is in outstanding health; and he still teaches regularly.